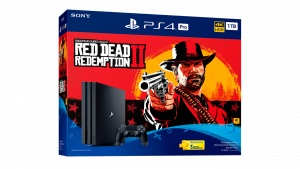 We aim to show you accurate product information. Manufacturers, suppliers and others provide what you see here, and we have not verified it. See our disclaimer
Discover the ultimate gaming platform and one of the most anticipated games of 2018 with the Sony Red Dead Redemption 2 PS4 Pro Bundle. Few video games have the fan base of Red Dead Redemption. Red Dead Redemption, along with Grand Theft Auto, helped make Rockstar Games one of the most respected gaming companies in the world. From the creators of Grand Theft Auto V and Red Dead Redemption, Red Dead Redemption 2 is an epic tale of life in America at the dawn of the modern age, with single-player and multiplayer options via Red Dead Online. The PS4 Pro Red Dead Redemption 2 bundle is the best way to experience the game, from its superior graphics to its DUALSHOCK®4 wireless controller. The game comes on Blue Ray, but is even more visually stunning when played on a 4K HTDV; HDR features also are available on PS4™ system, for added convenience. The PS4 Pro’s 1 terrabyte hard drive provides ample storage for Red Dead and all of your favorite PS4 video games.
Sony PlayStation Red Dead Redemption 2 PS4 Pro Bundle:
Comes with everything needed to start gaming right out of the box, including a Jet Black PS4 Pro console, and a DUALSHOCK®4 wireless controller
PS4 Pro Red Dead Redemption 2 bundle provides the highest-quality resolution from a PS4 system
Blu-Ray game disc for superior graphics
Game can be played in single-player or with other players via Red Dead Online
1 terrabyte hard drive for superior storage capabilities for all of your favorite PS4 video games
4K HDTV owners will benefit from a high